While the 2012 Year-In-Review data for the North American comics shop market appeared here in January, there's of course a wider world out there — and while the "Direct Market" does continue to account for almost two thirds of print sales, it helps to put things into a larger perspective.

As in past years, Brian Hibbs has gotten access to the actual sales for trade paperbacks and graphic novels in 2012 as recorded by Bookscan, a service of Nielsen — and I have again used that material as a tool to figuring out the larger world. You can see my 2011 report here, as well as a grid with all years on the site. It also informs the graphic at lower right, which is a visual representation of the relative sizes of each category, depicted by physical area. 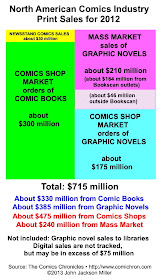 Bookscan draws upon cash-register data from many member bookstores — and from Amazon — and its share of industry sales on individual titles varies. The service reportedly covers something like 75% of bookstore sales, but that varies depending on the item; Bookscan appears to capture more sales for some titles and less for others, but Hibbs' list does go all the way down to the single digits for copies sold, so it's a fair starting point for analysis.

Armed with that, as in past years, I have calculated an "all-industry number. Here's how it works.

• The Top 300 comic books each month in the Direct Market are known to have had orders totaling $285 million. The Top 300s capture most, but not all the comics activity; if 5% of sales fell outside the Top 300, North American periodical sales in comics shops would be close to $300 million.

• Periodicals are also sold in the newsstand. Marvel's postal Statements of Ownership have not yet appeared to my knowledge, and Archie's are only now coming out, but I expect we'll find little change in that market: it's a very small portion of sales. Throwing in the few million dollars that remain for postal subscription sales of comics, we're probably looking at around $30 million in North American periodical sales outside of comics shops.

So that's about $330 million for comic books. That's up about 10% from my guess from last year. On to graphic novels, a term which for our purposes here includes softcover and hardcover collected editions:

• We know that in 2012 the Top 300 Graphic Novels each month had orders totaling $84.6 million in the comics shop market. That only captures a bit more than half of the overall amount Diamond shipped, however; the overall figure for 2012 is probably in the neighborhood of $175 million.

That gives us $475 million for the Direct Market overall, of which about 70% comes from single-issue comics.

•  Now to graphic novels outside the comics shops. Hibbs' data finds $164 million in graphic novels sold by Bookscan. He's had to make some judgment calls because of Nielsen's classifications: he's kept in the market-leading Dork Diaries, which I probably wouldn't, but may have excised things I'd have kept, too. As my former boss Chet Krause once said, the only category that fits every product in a field is "miscellaneous."

• If Bookscan covers between 75-80% of the market, that could mean there's another $46 million or so in graphic novel sales outside Bookscan.

That would give us $210 million for all graphic novels sold outside comics shops in 2012 — about 55% of the total $385 million in graphic novel sales for the year.

All together, we'd be looking at around $715 million for all North American comics and graphic novels: up about $35 million from 2011. And that growth is all in the comics shop market, which offset losses in the mass market. In 2011, the comics shop market was about 60% of the overall market for print sales; in 2012, it was closer to two thirds. The synopsis: