As announced to the general public in a report from Hollywood Reporter, DC has cut ties with Diamond Comic Distributors and will not solicit any titles after the June 1 Final Order Cut-off. This ends not just a 23-year period in which Diamond was the only source for comics periodicals from all major publishers, but also a sales relationship with Diamond owner Steve Geppi that precedes Diamond's Feb 1, 1982 founding. (Read more about the start of the DC/Diamond exclusive relationship.)

The report quotes an e-mail to retailers, saying that retailers who want new DC product must order graphic novels from its bookstore distributor, Random House. Periodicals must be obtained from Lunar Distribution and UCS Distributors, sister companies to two retail operations, DBCS and Midtown Comics, which it granted distributor status to in April during Diamond's Coronavirus pandemic shutdown.

It's not clear as yet whether retailers would be ordering Random House's books nonreturnably; it doesn't seem like there would be any reason for Random House to set up such an option, even though the nonreturnable system favors publishers by allowing them to control print runs. 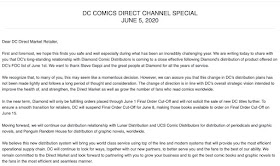 DC's e-mail to retailers, according to THR (and depicted at right, as seen on UCS's website), said “We recognize that, to many of you, this may seem like a momentous decision. However, we can assure you that this change in DC's distribution plans has not been made lightly and follows a long period of thought and consideration. The change of direction is in line with DC's overall strategic vision intended to improve the health of, and strengthen, the Direct Market as well as grow the number of fans who read comics worldwide.”

One tip-off that something was coming was that this week's reorder and advance reorder charts were not released by Diamond on Wednesday; we expected that was an oversight or restart-related, but in fact it might well have simply been the case that any DC comics that were on the advance reorder charts — and it has had many there this month due to the fact that all its orders were canceled and resolicited — would not be coming out from Diamond.

The market share involved: DC in 2019 represented 30.74% of Diamond's comics and graphic novel units and 29.23% of its dollars. On the dollar side, that amounts to almost exactly $155 million at full retail. DC's share of that would have been in the $60 million neighborhood, with Diamond's fee — which Geppi has said hasn't changed in years — being considerably lower.

Comics and graphic novels are, it should be noted, only a portion of Diamond's sales, though certainly the largest portion. It's unclear what happens with regards to physical merchandise that might have been DC-branded.

For comparison, the DC share of Diamond's comics units and dollars is higher than Marvel's was when Marvel left Diamond in July 1995, but retailers had been either cutting their Marvel orders or moving to Heroes World Distribution in advance of that. The Marvel share of Diamond's print business in December 1994 — when the Heroes World news broke — was 30.9% of units, and 33.6% of dollars. Fairly close to the DC shares — though recall that Image had a much larger share in that era, 16% of the dollar market.

An interesting possible wrinkle: Nonreturnable comics = back issues. Another interesting matter is that Geppi had spoken in video podcasts — including one by Dan Shahin's Comic Book News — of Diamond possibly starting up a back-issue division that would serve only retailers. Diamond has always had older comics on its shelves, of course; unsold comics are shelved for months and months and sold by Diamond as new.

But a nonreturnable comic book becomes a back issue the second it reaches a retailer's store. There's nothing stopping Diamond from obtaining DC comics on the secondary market in bulk and making them available to other retailers; that's exactly the business DCBS and Midtown are in, only they sell to consumers as well. Diamond already carries collectible comics that have gone through the hands of a third party before — think the Dynamic Forces signed editions — so there would be little in the way of Diamond launching a category making comics DC has already sold to retailers available to its own shops as back issues.

That's speculation, but make no mistake — there is eighty years of history behind the idea that once a comic book has been purchased, it can be resold anywhere and to anyone. A seller doesn't even have to put it in a bag and board. You can't start a store or print something on bagged multipacks that violates a publisher's trademarks, but comics are absolutely tradable commodities.

And, as you'll see below, UCS's own charts demonstrate that no distribution agreement is required for a distributor to sell back issues to retailers.
The sales charts: As to the sales charts, we're back to July 1995, when Marvel shifted its sales to Heroes World, its own distributor, and DC moved its titles just to Diamond (though Capital did keep them for two extra months as a settlement to a lawsuit). For a year, it wasn't possible to see at a glance what all comics in the business were selling relative to one another. It should be noted that within a year, Marvel realized that not having unified charts was detrimental to the company — hence their agreement to provide sales charts from Heroes World to me beginning in September 1996, restoring a single sales chart to the business. 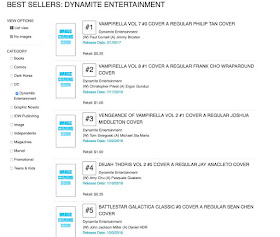 UCS launched its own bestsellers page in May, as seen here; we archived the earliest UCS chart when it appeared. It's a dynamically updated Top 10 mixing released and new material, and it now includes categories for Marvel, Dark Horse, Image, IDW, and Dynamite.

It is not apparent that those companies have made sales agreements with UCS: all the books on the list for those companies are from 2019 and before — I was surprised to see a comic book I wrote in 2018 making the Dynamite charts (seen at left). This material would appear to be back issue stock from the Midtown Comics retail arm — purchased from Diamond — being reoffered to retailers, in exactly the manner I've described may happen with Diamond with regard to DC's comics.
For Comichron's purposes, there isn't really any information in this kind of chart that would be of use to readers collectors years down the line, nor is there any way to combine it with Diamond's information. Should UCS or Lunar — or even DC, as in the Marvel 1996 case — make available more specific data in a manner that accounts for all copies sold in specific time periods, Comichron will certainly add it to the archives.

So we've returned to the mid-1990s era, at least for the time being, when it comes to the charts. I've spent the last week researching DC's sales in the 1960s, and can say that the one thing that's constant about the business is that there are long periods where nothing seems to change — followed by big bursts where everything does. How big a burst this one will seem years from now may become more evident as the summer progresses.

Update, 5 p.m. CDT: UCS Distributors has acknowledged DC's break with Diamond, and notes that no new DC comics will ship the week of June 30 "to allow additional time for retailers to get approved for an account." Brian Hibbs points out that's already a skip week for Marvel, so there's no new Marvels or DCs in advance of the holiday week.

Update, 7 p.m. CDT: And now Diamond has responded, with Steve Geppi implying that DC's move was made on very short notice indeed.

Update, 10:30 p.m. CDT: And before this long day is through, a couple of charts for your perusal.
The first one suggests that DC's growth, while not exactly "stagnant" as its e-mail to retailers suggests, was not as robust during the mid 2010s boomlet as the other publishers'.

The other highlights that there were still an average of 375 non-DC comic books a month coming out from Diamond last year (variants not included) — and that while DC cut back something like a tenth of its line in 2019, Marvel absorbed all those rack spaces and more.

Note that 86 DC cardstock variants have been removed from the 2019 calculations. A small number of similar items could probably be culled, mostly from the "other" category, in a detailed accounting, but the fact remains that somewhere in the neighborhood of 4,500 unique non-DC comics hit the stands last year. 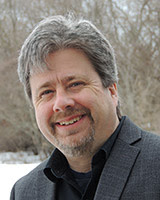