According to new estimate by ICv2 and Comichron 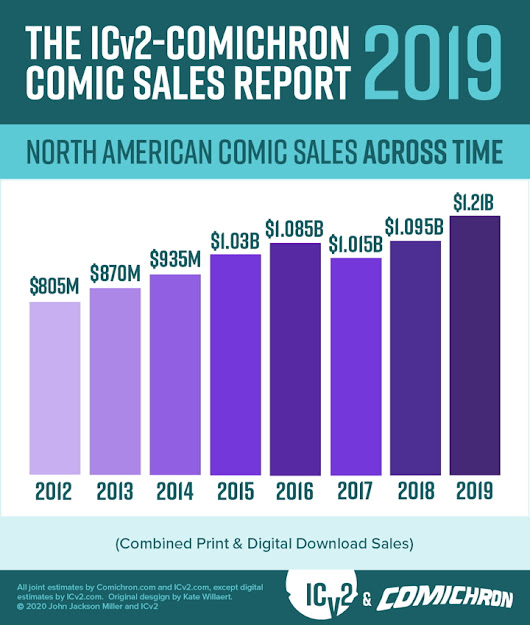 “Print comics sales had never before topped $1 billion in current dollars, and one has to go back to the boom of the early 1990s to find sales at or above that level when adjusted for inflation.” Miller said of the new estimate.

“The massive shift to graphic novels as the preferred format for comics continued in 2019,” Griepp said, “bringing sales in the book channel above the comic store channel in North America for the first time in the history of the medium.” 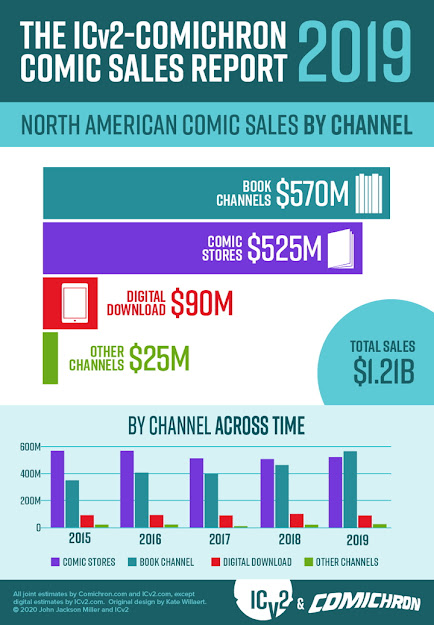 Sales of kids graphic novels in the book channel, which includes chain bookstores, mass merchants, major online retailers, and Scholastic Book Fairs were once again driving the format. Digital sales were back to 2018 levels as the growth in catalogue titles across major platforms slowed. Sales of periodical comics in comic stores were up mid-single digits. 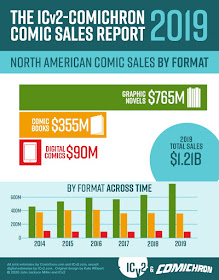 The pair also commented on the challenging environment for comics and graphic novel sales in the COVID era. “Demand for comics content remains high,” Griepp noted, “and retailers have been finding inventive ways to fill that demand.”

“The comics industry has displayed resilience during many difficult times over the decades,” Miller said. “While the pandemic may prove its biggest test yet, 2019 provided the business with a strong base.”

As presented above and in the accompanying infographics, the analysis by Comichron and ICv2 was divided up between periodical comics (what some call “floppies” or “pamphlets”), graphic novels, and digital download-to-own sales. All print figures are calculated based on the full retail price of books sold into the market, and do not account for discounting or markup. Digital sales do not include subscription-based “all you can read” services.

The “Other” channel in our channel breakdown includes the Newsstand (periodical sales through specialty retail and mass merchant chains) and Crowdfunding (Kickstarter, etc.) channels. This year, those two channels each accounted for roughly half of the “Other” category.

Sources for the information include NPD BookScan, which collects weekly point-of-sale data on print books from over 16,000 locations including e-tailers, chains, mass merchandisers, independent bookstores, and more. NPD BookScan covers approximately 85% of the U.S. trade print book market. Some publishers classify titles that are primarily text, or art books, as graphic novels; those titles are removed from the analysis.

The analysis incorporates information released by Diamond, the largest distributor of English-language comics and graphic novels in the world, on sales to comic stores. Information is also gathered from a variety of other sources, including publisher, distributor, and retailer interviews.

ICv2 is the #1 industry source on the business of geek culture, including comics and graphic novels, hobby games, and showbiz on its Website, www.ICv2.com, and in its magazine, Internal Correspondence. For the people on the front lines of the geek culture business, staying ahead of the trends isn't something that can be left to chance-it's a basic necessity for being successful. That's why ICv2 is the #1 source of news and information for the buyers, gatekeepers, and tastemakers on the front lines. ICv2 is where trend-watching is a science.

Comichron is the world’s largest public repository of comic-book sales figures, featuring data from the 1930s to today about comic book and graphic novel circulation, cover prices, and market shares on its website, www.comichron.com. With data and analysis on the distant past as well as the present, Comichron serves as a trusted resource for academics studying the historical reach of the medium and for collectors seeking accurate information about how many copies of a comic book originally circulated.